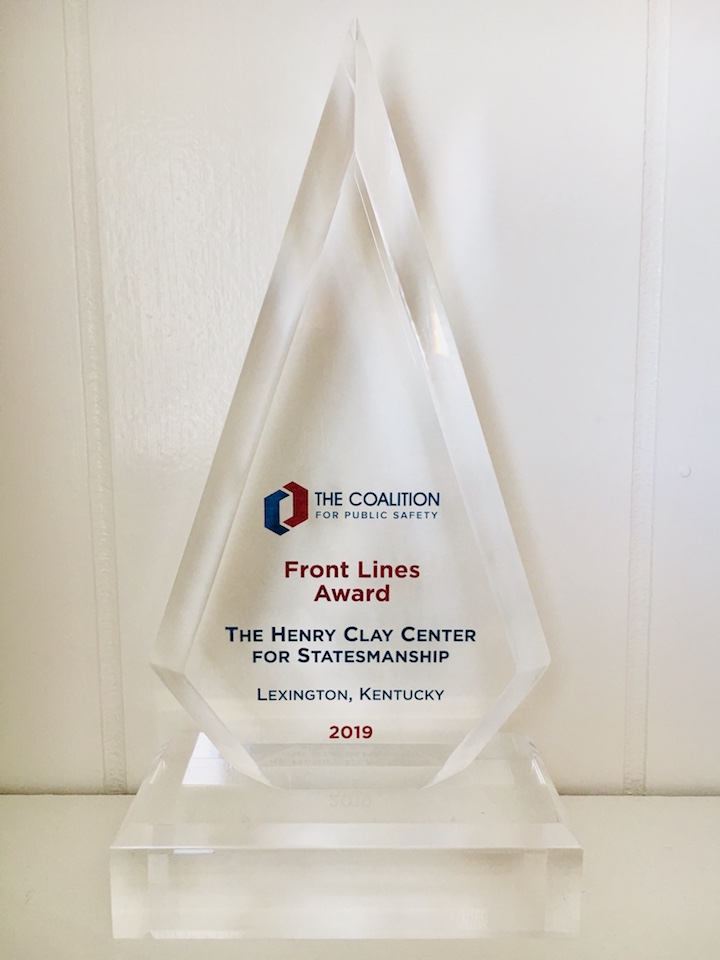 06 May Front Lines Award Given to Henry Clay Center

Posted at 18:26h in Blog by Abby Didawick

On May 3, 2019, the Coalition for Public Safety honored the Henry Clay Center for Statesmanship with a Front Lines Award from the Coalition for Public Safety. The award was presented at the Celebration of Second Chances Derby Eve event at the Kentucky Castle. The Front Lines Award recognized Kentucky organizations working on the “front lines” of criminal justice reform. The 2019 College Student Congress will feature criminal justice reform as one of four key policy areas for which attendees will craft bipartisan legislation. Moreover, on May 22, 2019, the Center will host its first-ever policy summit in Washington, D.C., The Clay Summit on Criminal Justice Reform: “Beyond the First Step Act.”

During the awards ceremony, Executive Director of CPS Holly Harris remarked on the importance of the Center’s work in engaging millennials from across the political spectrum in the conversation surrounding criminal justice reform. The Center’s dedication to including and empowering the voices of young leaders in policy formation is a hallmark of the Student Congress programs, which prepare future leaders with skills in statesmanship, civil discourse, negotiation, cooperation, and compromise.

The Celebration of Second Chances also awarded lawmakers and advocates from across the country who have been instrumental in passing criminal justice reform at both the state and federal levels. Sherly Delozier (R-PA) and Jordan Harris (D-PA) were recognized for their work on legislation providing those with nonviolent criminal records opportunities to avoid issues with obtaining housing, employment and education. Sander Rue (R-NM) and Antonio Maestas (D-NM) worked as a bipartisan pair on an omnibus package of reforms in their home state of New Mexico. Additionally, Jimmy Higdon (R-KY) and Gerald Neal (D-KY) of Kentucky were awarded for their successful expungements bill.